Humanitarian workers carry out incredible lifesaving work every day on the front line of crisis response to assist those in the greatest need. Yet repeatedly, despite the fact that although billions of dollars are spent annually on humanitarian support to households in crisis, we have extraordinarily limited evidence on the impact of this support. This project is the first large-scale evaluation that rigorously tests the impact of humanitarian cash transfers in response to a sudden climate shock, and the importance of being timely for an impactful response.

This project seeks to address the knowledge gap by examining the welfare impact of a one-off anticipatory cash transfer provided to households forecasted to experience extreme floods in Bangladesh.

In 2020, Bangladesh experienced the second highest recorded floods since 1989. More than one million households were inundated, and 5.5 million people were directly affected by flooding at the beginning of August 2020. Flood waters halted agricultural production, disrupted food markets, schools, and health services, and damaged infrastructure.

By carrying out the fastest cash allocation in their history, the Central Emergency Response Fund (CERF) enabled the World Food Programme (WFP) to deliver cash to about 23,000 households a week before the local flood peak. This anticipatory action was part of a vital series of anticipatory action pilots supported by the UN Office for the Coordination of Humanitarian Affairs (OCHA). With support from the International Federation of Red Cross and Red Crescent Societies (IFRC) and the Bangladesh Red Crescent Society (BDRCS), the government and local NGOs, the United Nations was able to provide support to more than 220,000 people a few days prior to and during peak flooding.

Unlike previous years when response preparation started after devastating flooding materialised, WFP provided a small cash transfer of $53 via mobile money to over 23,000 households in advance of peak flooding, based on flood predictions and an action plan that had been approved at the start of the monsoon season. The response in 2020 was faster, and cheaper than during the last major floods in 2017 and 2019, when support arrived about 100 days after peak flooding.

Evidence on the impact of a one-off cash transfer in a disaster are limited, despite the widespread use of such transfers in crises, reflecting more broadly a dearth of evaluations in the humanitarian sector. To assess impact, we exploit administrative constraints experienced during the programme roll-out caused by the quick onset of the flood and restrictions on movement as a result of Covid-19, to compare households who received a cash transfer, with otherwise comparable households which did not receive the cash transfer.

10 to 12 weeks after the cash transfer, researchers randomly sampled and surveyed a large number of households over the phone, with almost 9,000 households forming the sample of interest. The survey data was complemented by satellite imagery to measure the flood intensity and timing at mauza level, the smallest administrative unit in Bangladesh.

The study found that the anticipatory cash transfer provided immediate temporary relief during the flood. The cash was largely spent on food and households were 36% less likely to go a day without eating if they had received the transfer, compared to households that did not.

The research team also found evidence that timely cash support did more than provide temporary relief during the flood. It also helped households change their behaviour in ways that could have long-term benefits:

The size of the effects of receiving the cash after three months are small, but sizeable given the amount of the transfer, and the effects are surprisingly broad, impacting both current and future welfare.

The evaluation also provided some important operational lessons. The study found that speed matters, even when acting early. Households that received a cash transfer one day earlier during the floods had a small increase in welfare. A back-of-the-envelope calculation suggests that the average treatment effect of cash dissipates entirely if the cash transfer is not received within 12 days of the local flood peak. These results highlight the importance of investing in identifying, enrolling and targeting the most vulnerable households and people well in advance of disasters and the value of using earlier triggers to release funding.

The distribution of anticipatory cash transfers in Bangladesh map (left) and The welfare effects of the cash transfer relative to the control group image (right).

Image description: (Left) Map of the distribution of WFP cash to households along the Jamuna River in northern Bangladesh. The size of the purple dots indicate the number of households targeted in each union. Bahadurabad Station was used to forecast the water levels and activate the triggers. (Right) This image summarises the welfare effect of the cash transfer relative to the control group. Markers indicate the standardised mean treattment effect of receiving the cash transfer on pre-specified outcomes (red) and the sub-indices used in constructing the main outcomes (blue), with 90% confidence intervals shown. Solid markers indicate significance at the 10% level, whereas the transparent markers indicate that we cannot reject the null hypothesis that these effects are significantly different from zero. Covariates include age, gender, education level, household size, dependency ratio, house structure, UNFPA/FAO recipient status and land type. Union fixed effects are included. Standard errors are clustered at union level. 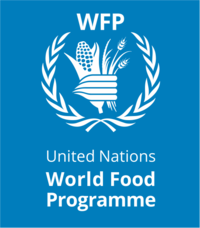 PHOTOGRAPHS BY THE WFP 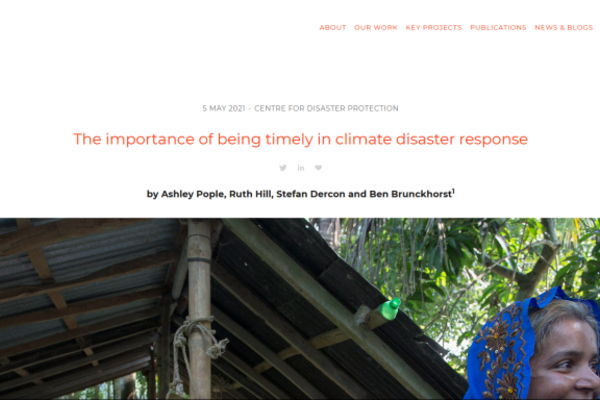 This blog summarises the findings from the first large-scale evaluation that rigorously tests the impact of humanitarian cash transfers in response to a sudden climate shock, and the importance of being timely for an impactful response.
May 2021 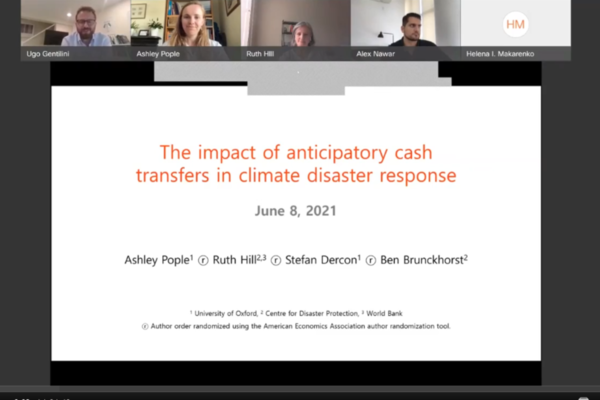 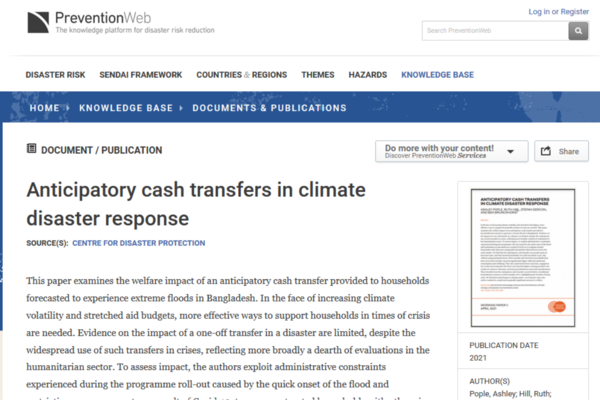 Paper published on the Prevention Web Knowledge Base. The knowledge platform for disaster risk reduction. 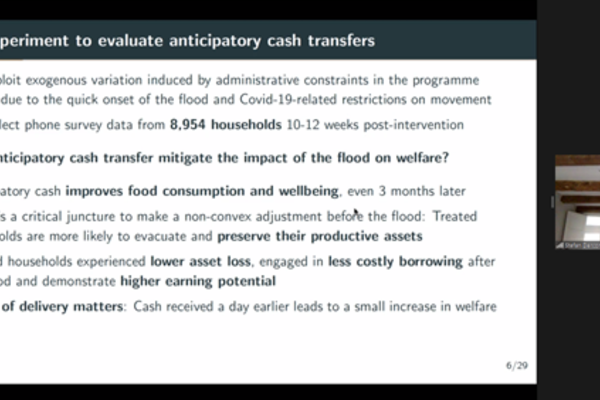 Stefan Dercon discusses the project as his keynote 'The Importance of Being Timely' at the Globalisation and Development (GLAD) Conference 2021.
July 2021